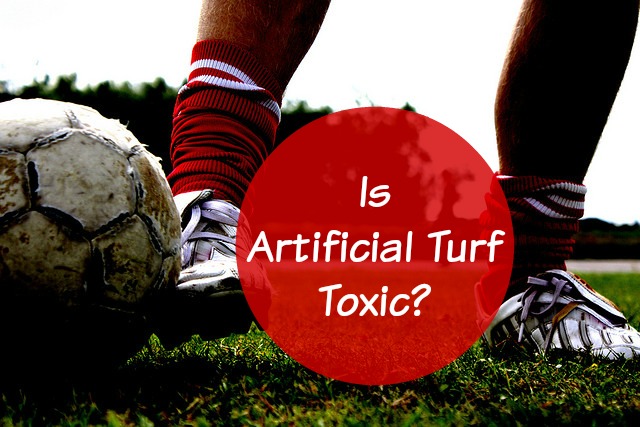 This post was originally published at Moms Clean Air Force

It’s another gray, rainy day in New England and in a few short hours I’ll be driving a car filled with energetic young children to one of their four weekly soccer practices on a synthetic turf field. Unless thunder and lightening kick in their practice will go on, rain or even snow notwithstanding. The reason being an artificial turf field is almost always ready for play regardless of the weather.

For this reason and more the demand for artificial turf fields has grown to the point where more than “8,000 multi-use synthetic turf sports fields can be found throughout North American schools, colleges, parks and professional sports stadiums. About half of all NFL teams currently play their games on synthetic turf and, since 2003, over 70 FIFA U-17 and U-20 World Cup matches have been played on synthetic turf soccer fields.”

Artificial turf was originally invented by Monsanto in the early 1960’s and has taken several forms since then, with the most recent being “crumb rubber”. This type of artificial turf, which contains tiny black crumbs of rubber made from old car tires, can contain zinc, benzene, carbon black and lead, among other toxic substances.  As many parents well know, these “black crumbs” travel home in our children’s shoes, uniforms and hair and ultimately end up on the floor of our cars and homes.

Now we’re learning those black crumbs may be doing more harm than good. Soccer coach Amy Griffin began doing her own investigation  when two of her goalkeepers from the University of Washington were diagnosed with Non-Hodgkins lymphoma. She compiled a list of 38 American soccer players — 34 of them goalies – who have been diagnosed with cancer. Ethan Zohn, a former professional soccer player, winner of the reality-television series “Survivor”, co-founder of Grassroot Soccer and a Hodgkins lymphoma survivor has had similar findings. He’s compiled a list of 50 or so goalkeepers who’ve battled cancer.

“Since I’ve been public about my cancer journey, lots of soccer players that have or had cancer have reached out to me via social media etc. I noticed a weird similarity…many were keepers. Then Amy Griffin, the coach at University of Washington reached out because she noticed the same trend. Not all were the same age, but most were young adults, between 15-39.”

Both lists are not scientifically based, but the sheer number of players (especially goalkeepers) diagnosed with cancer is something that can’t be ignored and they raise concerns about the potential risks of playing on artificial turf.

Zohn started playing soccer when he was 6 years old and really began playing on turf when he was out of college. He freely admits that “the likelihood that playing on crumb rubber turf caused my cancer is very slim”, but goes on to add “kids growing up on artificial turf today with long term repetitive exposure is different.”

When asked why he thinks goalkeepers were taking the brunt of the diagnoses, Zohn responded with this:

“A dedicated goalkeeper trains differently than the others. We are in constant contact with the ground in many different ways. Some training sessions are 90 minutes of just diving to save low balls. We sit, stretch, dive, roll in it. We are down low and breathing the air, injesting rubber, it gets in our cuts, eyes, mouth, nose. On hot days the temp is 10 degrees hotter on turf. Add some water and you boil the stuff. “

As parents we should not have to sleuth around the playground making sure equipment and fields are free from toxic chemicals, nor should we have to tell our children that they can’t play a sport outside because it could make them sick.

If there are potential health hazards they need to be regulated before our children are playing and rolling around on them. It’s time to take the burden away from parents and place it where it belongs – with industry. Our government need to regulate toxic chemicals by requiring a more thorough health testing of products BEFORE known carcinogens end up in our children’s playgrounds, fields and ultimately in their bodies.

What can we do about artificial turf?

Last weekend I was sitting on the sidelines at my son’s soccer game when a group of concerned parents began discussing the dangers of artificial turf fields . While I was angry that there needed to be a discussion, it was refreshing to hear that parents were taking this seriously. The discussion led to the 20 million dollar question: “What can we do?”

Here are a few suggestions for concerned parents and children:

Our current chemical safety law, the Toxic Substances Control Act of 1976, is badly broken. It allows chemicals onto the market without adequate safety testing. It’s time to change that.

TELL YOUR SENATORS: PROTECT OUR FAMILIES FROM TOXIC CHEMICALS

Do your kids play sports on an artificial turf field?