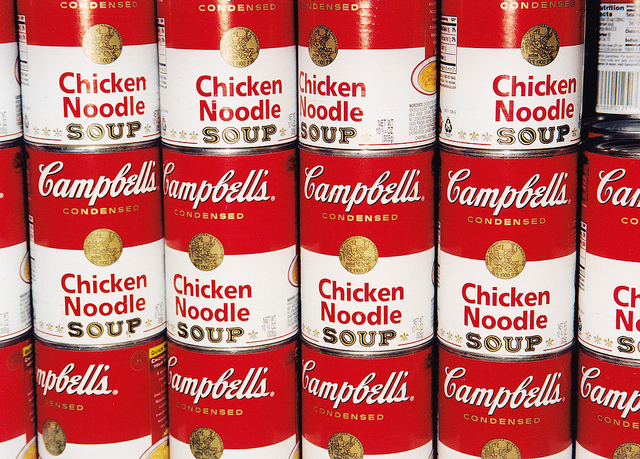 I remember the Campbell’s soup jingle all too well- remember  “soup is good food”? Well it turns out that Campbell’s soup doesn’t really fall into the “good food” catagory–it’s cans are laden with bisphenol A (BPA).  In September of 2011 a report was released by the Breast Cancer Fund that found Campell’s soup to have some of the highest BPA levels among a variety of canned foods it tested. Campbell’s Disney Princess and Toy Story soups tested the highest.

BPA is a nasty chemical

After months of pressure from many concerned parents and other advocacy groups, including Healthy Child Healthy World, Campbell’s Soup Company announced that it will phase out the use of the toxic chemical bisphenol A (BPA) in its can linings.

Campbell’s made the first move, just as the U.S. Food and Drug Administration is about to decide by the end of March whether to ban the chemical’s use in all food and beverage packaging.

Once again, the US is lagging behind

The United States is so far behind on the BPA issue (and many other issues like artificial food dye and flame retardant in your soda). Canada, the European Union and Turkey have banned BPA in baby bottles. Japan has replaced BPA in all can liners. France voted in late February to uphold a ban on the use of BPA in all packaged foods.

Alternatives to BPA can be just as scary

While it’s a fantastic first step, we aren’t home free yet. Campbell’s didn’t give a timeline or identify what alternative can-lining materials it will use.

For years many of us have been purchasing products labeled BPA free thinking we were safe. A study was released where more than 450 plastic products, including many labeled BPA free, were tested. They found that more than 90 percent of the plastics (even those that were BPA free) released chemicals that mimic estrogen (the same claims against BPA).  They found that sometimes the BPA free products released chemicals having more estrogen activity than BPA-containing products.

Campbell’s has taken the lead and hopefully many other food and beverage manufacturers follow. Gretchen Lee Salter, Policy Manager at the Breast Cancer Fund said “To truly be an industry leader, the company (Campbell’s) now needs to fully disclose the timeline for the phase-out and the alternatives that will be used.”

Salter goes on to say:

Consumers aren’t just concerned about BPA. They are becoming increasingly savvy about the chemicals used in their food packaging and are demanding transparency from manufacturers. We want to make sure that any alternatives that are being used are actually safer for consumers, and the best way to ensure that safety is through full disclosure.

Our voices have been heard. We CAN make a difference by signing petitions and banding together on issues that affect us all.

HERE’s a petition you can sign asking Campbell’s to tell us more about their plans to phase out BPA. Thanks to Alicia from The Soft Landing for sharing the petition with me.

What do you do to avoid BPA?