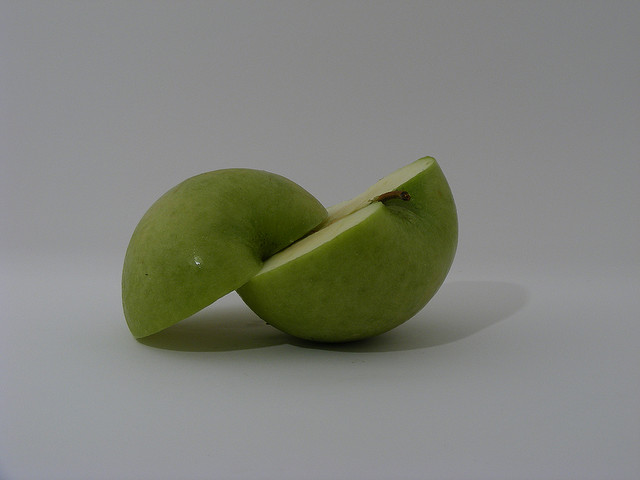 Yesterday I was listening to National Public Radio and heard a story about apples that I just can’t shake.

Imagine that. An apple that doesn’t turn brown when you slice it.

Placing everything that’s wrong with this creation aside, it’s a parents dream. This invention would have saved many apple slices from landing in the trash or compost bin.

Let me back up for a minute and share with you that we are an apple-loving family.

The unfortunate piece is that my kids won’t eat an apple if it’s the slightest bit brown or has any imperfections. I guess you could say that we’re snobby apple eaters.

For years this has been an ongoing debate between parent and child in our house. Wasting slightly brown apple slices doesn’t fly with me.

I struggle with conveying to my children that there’s no such thing as a perfect piece of fruit. That’s the way nature intended it to be.

The apples at the supermarkets look so pretty and shiny. Have we come to expect that our apples are picture perfect?

How “Arctic” Apples are Made

NPR outlines how the GMO “Arctic” apples are created:

The non-browning trait was created by inserting extra copies of genes that the apple already possessed. These genes normally create an enzyme called polyphenol oxidase, which is responsible for the chemical reaction that causes browning.

Yet when extra copies of the gene are added, the apple reacts by shutting down all of them, stopping production of the enzyme and preventing the browning reaction. (Like any apple, these apples eventually will go brown from normal rotting. It’s the immediate “enzymatic browning” that’s blocked.)

The company has already developed non-browning versions of Golden Delcious and Granny Smith with Gala and Fuji coming up soon. These non-browning apples are waiting for approval from the U.S. Department of Agriculture. There’s no surprise that they face some big-time opposition.

The environmental risks and risks to the existing organic crops also play a big role.

Come on people. Do we really need apples that don’t turn brown? This is really taking GMOs to the next level of crazy.

It’s All About the Money

Again, no surprise here. Okanagan Specialty Fruits, creators of “Arctic” apples, hopes that parents and food service companies invest in this apple. The sliced apples we can buy now are treated with antioxidant chemicals to prevent them from turning brown. The “Arctic” apple won’t need this treatment and according to the creators will save quite a bit of money.

Can’t wait to hear what you think. Would you buy non-browning, genetically engineered apples? I think my kids would in a heartbeat!