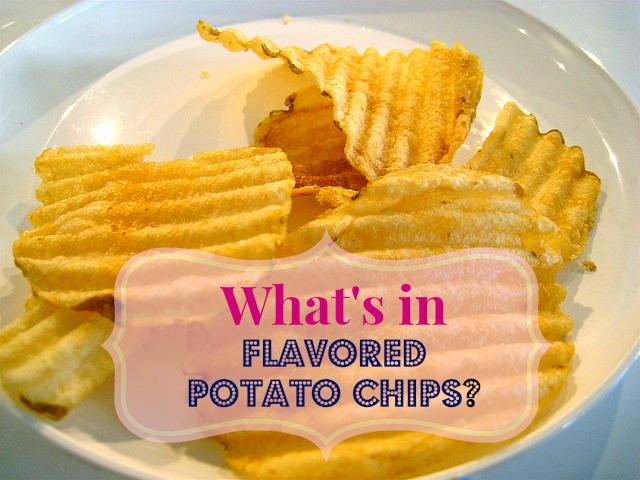 Flavored potato chips seem to be all the rage.

A long, unexpected weather delay in an airport yesterday gave me ample time to search far and wide for healthy snacks. I stumbled upon a variety of unhealthy snack options, some of which were downright disgusting. But when you have hours to kill in an airport things that would look appalling on a normal day start to look somewhat appealing. Desperation at its best.

What I discovered is quite simple: If you’re a lover of strange flavored potato chips then the airport is the perfect place for you.

Not one is appealing to me, but clearly I’m in the minority since they’ve made their way onto market shelves and people everywhere seem to be passing the time snacking on a bag of these flavored potato chips.

Curiosity prevailed and I felt compelled to do a little digging.

What was making these fine flavored potato chips such a hot and tasty commodity?

After a bit of legwork I was able to confirm that Chicken & Waffle chips actually do contain chicken.  The natural flavor added to the chips includes chicken flavor.  There’s also the chicken & waffles seasoning that makes these flavored potato chips probably taste like the real deal. To be fair, I’ve never tasted them.

And then there’s the Pecan Pie flavored chips by offered by Pringles for a limited time only. Yes, your salty and sweet dessert Pringles have been released. According to the Pringles site these chips are “… like a mega-nutty sweet flavor explosion for your pie hole”. Wow.

While browsing through the lengthy ingredient list I didn’t see pecans mentioned anywhere (nor pie for that matter). A few other ingredients jumped out including: YELLOW 6 LAKE, RED 40 LAKE, and BLUE 1 LAKE. Just like grandma’s real pumpkin pie, right?

And the last flavor I’ll pick on for today: Cheese Burger Flavored potato chips by Pringles. For some reason this flavor tops wins my vote for most revolting. It’s just wrong. I read through the ingredient list several times and I’m still not sure what gives these chips their cheesburgery flavor. It could be the “natural smoke flavor” or perhaps the “natural and artificial flavors”. I’m pretty sure the flavor doesn’t come from the YELLOW 6 LAKE, RED 40 LAKE, or BLUE 1 LAKE that I found in these chips.

Placing all the frightening ingredients aside, there’s one larger issue that you won’t find on most labels. These chips could contain genetically modified ingredients.

In the U.S., Americans spend $10 billion a year on potato chips alone. Approximately 90 percent or more of the nation’s corn, soybean, canola and cottonseed are genetically modified, along with a growing list of fruits and veggies. According to the Non-GMO Project:

Genetically modified NewLeaf potatoes were introduced by Monsanto in 1996. Due to consumer rejection by several fast-food chains and chip makers, the product was never successful and was discontinued in the spring of 2001. There are no genetically engineered potatoes in commercial production, and potatoes are considered “low-risk” by the Non-GMO Project Standard.

So it’s not the potatoes I’m worried about. It’s the corn and soy. Most of these chips contained corn, canola or soy oil and/or corn flour that I found listed as an ingredient in most potato chips.

Look for organic chips that have the Non-GMO Project Verified label.

One of my all-time favorite chip brand is Late July Organic (affiliate link). They’re not potato chips, but they have some pretty fancy flavored chips including Mild Green Mojo Multigrain Tortilla Chips

and Dude Ranch Multigrain Tortilla Chips. All of their chips are organic and Non-GMO Project Verified.

What’s your favorite brand of chips?