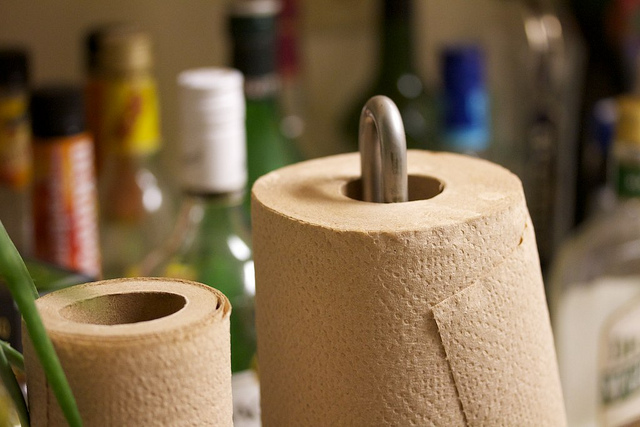 What if a whole group of people did the same “green” activity at the same time?

That very question was the foundation for a campaign spearheaded by  Reduce Footprints called “Change the World Wednesday (#CTWW)”.  Each week a new challenge is posted on the site and anyone can join in. The challenges are manageable for all-for example last week’s challenge was to take 5 minute showers all week. It was so bloody hot here that a 5 minute cool shower was doable.

The big picture: each challenge represents a small, simple change that, if done by few or many, can have a tremendous impact on the earth.

This week’s challenge was to avoid using or buying paper towels for 7 days.

Seven days isn’t unbearable-even for paper towel lovers.This one was pretty simple for me since our home is already paper towel free. About 6 years ago we let go of our addiction to paper towels and made the switch to reusable rags and towels. It wasn’t an easy transition, but now it’s integrated into our lives.

If every household in the U.S. used just one less 70-sheet roll of  paper towels, that would save 544,000 trees each year. If the switch was to using three less rolls per U.S. household per year, and that would save 120,000 tons of waste and $4.1 million in landfill dumping fees.

Tips on how to switch from paper towels to reusable towels

With three kids and a dog, there are plenty of times I wish I had a roll of paper towels. But we are well trained over here and know to reach for a reusable rag.

Ready to up the ante?

Already using reusable towels and clothes? A few CTWW community members decided to take the “no paper towel challenge” to the next level. I’m on-board with most…

Are you willing to join in the fun? Can you go for 7 days without paper towels? Hop on over to Reduce Footprints to check out next week’s challenge and to see how others are doing with the current challenge.

There is an Amazon Affiliate link in this post. If you use the link it will place a few pennies in my pocket. Thanks!