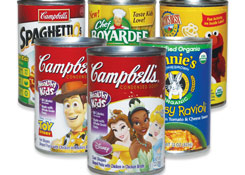 BPA just won’t go away. It has been found on everything from receipts to dollar bills.  In a new report by the Breast Cancer Fund dangerous levels of the toxic chemical bisphenol A (BPA) were found in a wide variety of canned foods specifically marketed towards kids. Some of the highest levels were found in Campbell’s Disney Princess and Toy Story soups. A child-sized serving of these soups could result in high levels of BPA exposure. There were even “healthy” companies on the list of BPA laden products- Annies Homegrown and Earths Best Organic.

How are these companies still making products with BPA? Maybe I’m naive-but I’m having a difficult time understanding how BPA is still around. This is not a new topic. It’s one that we’ve been talking about for a long time and the dangers are known and documented.

The president and CEO of the Breast Cancer Fund, Jeanne Rizzo says “There should be no place for toxic chemicals linked to breast cancer and other serious health problems in our children’s food. We hope this report will shine a spotlight on this issue and encourage companies to seek safer alternatives to BPA.”

I don’t know about you, but I’m angry.

Here are the products that tested positive for BPA

There is no excuse for this. BPA doesn’t belong anywhere near our food.  Please take the time to tell these companies that we are not OK with this.  It won’t take long and it will make a difference.

Can you think of any other ways to avoid BPA in canned products?