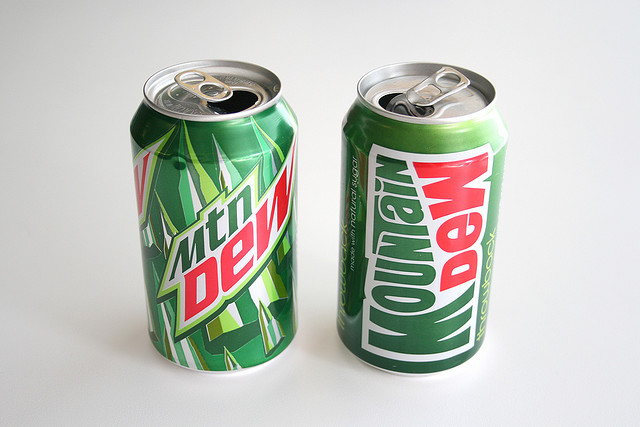 I don’t know about you, but I’m getting pretty tired of hearing about all the toxic stuff that’s in our food. A while back I wrote about how artificial food dyes in are found in our food.  A report, issued by the Center for Science in the Public Interest, showed food dyes—used in everything from M&Ms and Fruit Loops to Kraft Mac n Cheese—pose risks of cancer, hyperactivity in children, and allergies, and concluded that synthetic food dye should be banned. But it’s not.

The piece that I find very disturbing is that artificial dyes are used in the US, but not in other countries. Why? Because other countries seem to get it, while the US continues to place cost before the likely health dangers to a human being.

The US continues to make headlines, this time for allowing another questionable synthetic chemical in soda. Mountain Dew, Fanta Orange and other citrus-flavored drinks have an added synthetic chemical called brominated vegetable oil, or BVO. BVO has been patented as a flame retardant and many of our children (and adults) are drinking it.

According to Environmental Health News the following drinks contain BVO:

Why is it in soda?

BVO is used in citrus flavored soda to keep the fruity flavors mixed in. It gives the soda a cloudy appearance.  BVO isn’t a new addition to soda-it’s been added for decades.

What are the risks of BVO?

In the United States, 85 percent of kids drink a beverage containing sugar or artificial sweetener at least once per week.

After a few extreme soda binges — not too far from what many gamers regularly consume — a few patients have needed medical attention for skin lesions, memory loss and nerve disorders, all symptoms of overexposure to bromine.

Here’s the kicker: BVO is one of a class of chemicals that are banned in the European Union and Japan and under close scrutiny even in the U.S. for building up in human tissue and breast milk.

However, the soda companies have been using a safe alternative to BVO in other countries for years. Seems like it would be a simple switch in the US-so why hasn’t it happened? The answer is probably cost.

BVO is now joining BPA in the growing list of scary chemicals found in our food. Here we go again-placing cost above our children’s health. Our chemical system is clearly broken.

What you can do?

What else can we do to get this toxic substance out of soda?

To read more about the brominated battle take a look at the full report from Environmental Health News.