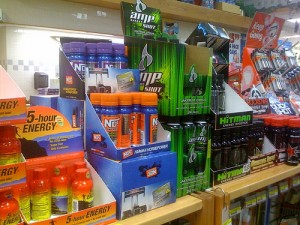 Energy drinks are the latest thing.  You have seen them-those cute little bottles sitting neatly to the right or left of the cash register in gas stations, pharmacies, grocery stores and convenience stores.  They have been spotted on the counters at Bed Bath and Beyond and local pet stores. They are everywhere, hoping to provide you with that much needed burst of energy when you are feeling exhausted.

Their labels are cute and trendy, appealing mainly to teens and students who need to pull all-nighters, but reaching people of all ages.  Their marketing claims to provide you with the energy you need to increase mental alertness and physical performance. The 5-hour ENERGY company claims “The two-ounce energy shot takes just seconds to drink and in minutes you’re feeling bright and alert. And that feeling lasts for hours.”

Let’s face it, we all feel exhausted at times-work, school, family, staying up too late.  A little “pick me up” can be attractive.   Many people continue to use coffee for caffeine intake-a known stimulant.  The energy drinks bank on the attractiveness of a quick fix-just down the shot and you will feel the long lasting effects immediately.  That’s why they are so appealing-they provide a quick punch; high dose of caffeine and instant effect. They are also available in many sizes and anyone can buy them, regardless of age.

There is no question that the drinks do work.  They will keep you up for the promised 5 hours and sometimes much longer. The bigger problem is that we are not listening to our bodies when they need rest- drinking an energy drink is no substitution for the sleep your body requires.

What’s in those little shots of “energy”? 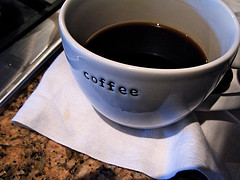 The danger of the drink

There are many ingredients in energy drinks.  There isn’t enough information to know the long term effects on our bodies.  We also don’t know enough about the interaction when they are all mixed together, used in high doses or mixed with other substances such as alcohol.

Caffeine is addictive-the more you drink the more you want.  Coffee is generally sipped and drank slowly.  Energy drinks are chugged and enter our systems quickly, giving us a burst of all these ingredients at once.  Caffeine causes dehydration.  We become thirsty and keep drinking-causing a vicious cycle.  Caffeine keeps us awake-so we don’t get the requisite hours of sleep our bodies need. A lot of people experience side effects when they have over  200mg of caffeine in their system, including sleeplessness, anxiety, heart palpitations, irritability, headaches, nausea, muscle tremors, anxiety and the jitters.

Have you tried an energy drink? How did it effect you?  Tell us all about it! 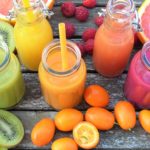