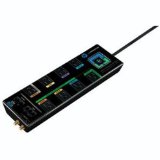 Have you heard of vampire power? Don’t get too excited-I’m not talking the Twilight Series.  Vampire power is the energy sucked out by plugged-in appliances that are on standby mode or  turned off.  Many small appliances made today continue to draw power, even when they are switched off. Nearly 20 percent of the electricity used by appliances is lost while they are sitting in the standby mode, waiting to be used.

According to a Lawrence Berkeley National Laboratory report, “A typical American home has forty products constantly drawing power. Together these amount to almost 10 percent of residential electricity use.”  That’s money right out of your pocket.

Do you leave your computer screen saver on all day?  Phone chargers plugged in? iPod chargers? I just walked around my house and took a quick inventory-electric toothbrushes, chargers that weren’t charging anything, televisions, so many things plugged in that were not in use.

Green Surge Protector to the Rescue

If walking around unplugging every item that is not in use seems like a big job-no worries-a new type of green surge protector has come to the rescue.  It allows you to shut down outlets with the flick a switch. Look at the time you will save- with a surge protector you can now shut down all of your plugged in devices at once instead of unplugging each, one at a time.

How  is this different than a standard surge protector?

These green power strips are able to ‘sense’ the flow of electrical current through the strip’s control outlet. This unique feature enables the surge protector to turn off selected equipment when not in use, saving you money.

Time to get one, or two or three-What to buy?

Bottom line: make sure you don’t leave all those appliances on. It just adds up to a lot of wasted energy. A simple way to save money and reduce your carbon emissions is by taking the time to turn off these appliances and devices when not in use. A surge protector will make that job much simpler.