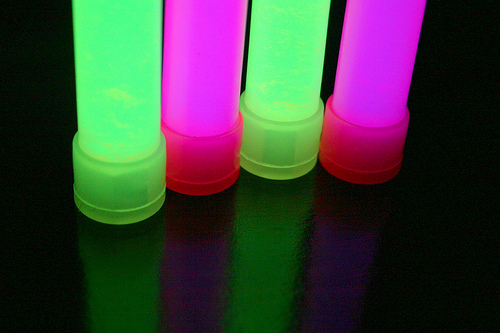 Halloween, concerts, college parties, goodie bags- glow sticks, glow sticks everywhere.  Glow sticks are pretty cool -no two ways about it.  Every time my kids score a glow necklace or bracelet  there is an abnormal amount of excitement: “Mom, can we bend them? Mom, is it dark enough yet?” Halloween is our favorite time of year to break out glow sticks of every color to “light up” our parade from home to home in search of candy.  Recently a used, green (think the color green for the moment) glow stick made its way to the top of one of our bookcases.  There it lay until morning when we discovered that it had leaked everywhere and managed to work its way through the finish on the bookcase. 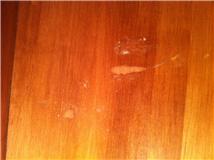 Glow stick damage to the bookcase

After seeing the amount of damage done by one little, supposedly non-toxic, glow stick, I began to question the “greeness” of those gleaming sticks.

Here’s some food for thought on glow sticks:

It is not my intention to be the Halloween Grinch-just want to be sure we have all the facts so we can make educated decisions.

I know these are not half the fun of glow sticks…..but perhaps it’s time we all thought about the impact our fun is having on the planet.

This year I am going to think twice before handing out those glow sticks to our neighbors.

What will you do?